It’s a fact that solvent based paints have always yellowed. This happens because the oils in solvent based paints need UV light to stay white- hence it’s the dark stairwells, or skirting boards behind furniture that suffer the most. Historically this reaction would take a year or two to become obvious.

In 2010 however EU legislation forced a 20% reduction in the solvents used in paints. This resulted in most manufacturers having to reformulate their solvent based paints, replacing the solvents with raw materials such as resin.

Unfortunately the major suppliers didn’t get this as right as they maybe thought they had at the time- the higher volume of solids resulted in the coating discolouring quicker; some as quickly as 2 weeks! Akzo Nobel (Dulux) were unfortunate to bare the brunt of this after a rather damning episode of Watchdog … in actual fact all suppliers were effected, and Akzo Nobel were excellent at resolving any issues that did come up.

So, how to avoid this unwanted side effect? This brings us onto Acrylic and Water Based paints. The first thing to point out is that these are not the same thing. Both use water as the carrier (and thus water is used to clean the tools), but beyond that they can be quite different. In a nutshell, an acrylic coating (e.g. Sadolin Superdec, Leyland Acrylic Eggshell) will never yellow. Some modern, and very clever,  'water based’ coatings can however still yellow, as the coating that remains once the product dries is actually much more like the that left by a solvent based paint than that of an acrylic.

It should be pointed out that the yellowing will happen a lot slower with this sort of coating- and may not even be obvious after several years. The other benefit, particularly for the experienced trademan, is the way these water based products ‘flow’- they feel much more like a traditional coating than the acrylics- which tend to need to be put on quickly for best results.

At the time of writing this Johnstones Aqua Gloss is generally regarded as the market leader for a water based product with a good gloss finish i.e. a good sheen level and tough. However, never ones to be far off the ball, Dulux Trade is about to bring out a product that claims to have sheen levels equal to that of a solvent based paint … and having seen trial brush outs at Trade Paints, we can say we’d agree with the claims. 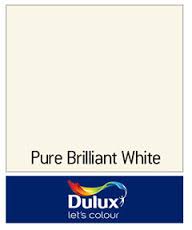 In summary, to avoid yellowing completely use an acrylic paint. If it’s a good gloss finish you’re after, with the other benefits of a water based paint (quick drying and low odour being the main two) use Johnstones or Dulux Trade … for best results they should both be used with their appropriate undercoats.

Trade Paints stock all products mentioned in this article ...  if you want to know more, or have any other decorating queries, please free free to come and speak to the experts.